Not only are retailers and online stores gearing up for busiest time of year, but the team with NORAD Tracks Santa truly is full-speed ahead all year long.

I had the wonderful opportunity to chat with Lt Sean Carter, the NORAD Tracks Santa Program Manager, who let us get a behind-the-scenes peek of how the Santa Tracker made its debut, as well as all of the work that goes on year round to prepare for Santa’s journey on December 24th each year.

STM: Thank you for your time, Lt Sean Carter! We all want to know how NORAD Tracks Santa got its start. Can you share the story?

CARTER: NORAD Tracks Santa traces its origins back to 1955, when a young girl dialed up the director of combat operations at what is modern-day NORAD’s predecessor, Continental Air Defense command, believing she was calling to speak with Santa Claus. The phone number in a local advertisement was misprinted, and that was the difference between calling the Santa hotline and calling the desk of the combat operations director.

STM: And magic was made and continues all these years later! For such a big night, how many months lead up to December 24th?

CARTER: It’s no exaggeration to say that there is at least some form of Santa planning going on every month of the year. Things really start to ramp up around September and into October, taking full flight by November and throughout December leading up to the big day—but even afterwards, there’s room for lessons-learned meetings, compiling after-action reports to pass down to future generations of Santa trackers, brainstorming for ways to improve processes, and, of course, thanking our sponsors and volunteers, without whom the program would not be possible.

STM: How long are phone lines open on the 24th?

CARTER: The phone lines are open for 23 hours, with 10 two-hour shifts from 4 a.m. through midnight (MST). Phone lines remain open afterwards until 3 a.m. with an automated message regarding Santa’s whereabouts.

STM: How do you get your volunteers?

CARTER: Most of our volunteers are DoD personnel and their families in the local Colorado Springs area. Shifts are also allotted for civic leaders and community members. We’re always looking at possible ways to expand our pool, but we’re never lacking in support.

STM: Do you have repeat volunteers and families who participate each year?

STM: What about snacks and attire…is everyone in the holiday spirit?

CARTER: Yes! As we approach December 24th, we see an influx of – not only phone line volunteers – but also food donations from local restaurants and eateries. In the week leading up to the big day, volunteers decorate the call centers to ensure the proper holiday spirit is well intact. We see a great variety of holiday attire.

STM: How many people call in?

STM: And these calls come in from all over the world, correct?

CARTER: We take calls from nearly every single country in the world with telephone access and international dialing. The website currently supports eight different languages.

STM: I’m sure all calls are special; however, what has been one of the most memorable calls received?

CARTER: Our team takes a lot of calls from the children of deployed service members asking if Santa will be able to visit their moms and dads—those ones are always very special to us.

STM: Is there a big screen with the tracker on it for everyone to view?

STM: What do you look forward to most on December 24th while tracking Santa?

CARTER: So this will be my first year on the team, but I can tell you I’m already looking forward to the holiday camaraderie, the buzz of excitement, and that magic feeling that surely grows and spreads throughout the day… and the milk and cookies.

STM: Of course the milk and cookies! Does Santa stop by the NORAD Tracks Santa building after delivering all of the toys?

CARTER: I can’t wait to find out!

STM: And, of course, in addition to tracking Santa, NORAD is making sure his flight around the world is a safe one.

CARTER: NORAD defends the homeland by utilizing complementary, multi-domain defensive capabilities toward the defense of Canada and the United States. These same systems help ensure Santa’s safe travels on the 24th of December each year. We are incredibly proud to continue to track threats to North America 24/7, 365 days a year, and to be celebrating 67 years of Santa tracking. We have the watch! 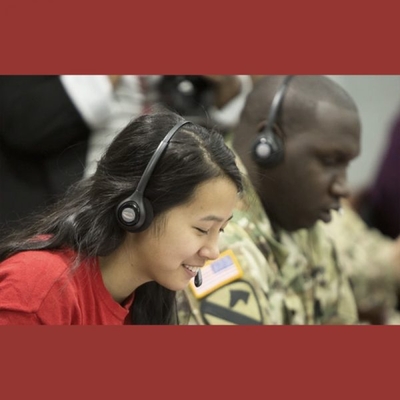